Home / World / Nato: Guam is not subject to any duty of assistance 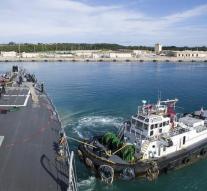 brussels - In the case of a North Korean attack on the American island of Guam in the Pacific, NATO countries are not required to provide military assistance to the Americans. According to a NATO spokesman, Guam does not form part of the area for which the duty of assistance in the North Atlantic Treaty applies.

However, Article 6 contains an area limitation. For example, an armed attack based on Article 5 is considered to be any attack on the territory of NATO countries in Europe or North America, as well as the territory of Turkey, or the territorial jurisdiction of one of the islands in the North Atlantic region north of the lobster chain.

As the island of Guam lies south of the lobster chain, it is beyond this definition. But in NATO circles it is emphasized that it is unlikely that allies on the basis of these formulations will deny the United States military support.