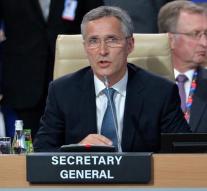 warsaw - The leaders of the 28 NATO countries agreed Friday in Warsaw with the alloying of troops in Poland and the Baltic states to deter Russia.

These battalions will be multinational and robust, said NATO Secretary General Jens Stoltenberg.,, They make it clear that an attack on one ally is viewed as an attack on the whole alliance. But Russia can not and should not be isolated and Moscow, we will also inform our decisions. ''

The four 'forward' units are led by the United States, the United Kingdom and Germany. It involves a total of three to four thousand men. Netherlands produces between 100 and 150 soldiers for the German battalion in Lithuania.