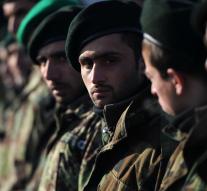 warsaw - The draw European members of NATO to 2018 annually a billion dollars for the financing of the Afghan armed forces. Which NATO chief Jens Stoltenberg announced Saturday.

,, We now have commitments worth a billion dollars from outside the United States, '' said Stoltenberg.,, We are prepared to continue after 2016. '' In total, about 12 000 US and NATO troops participating in the training mission.