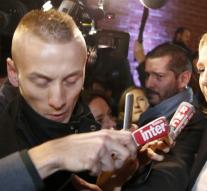 - The anti- European and nationalist Front National (FN) Marine Le Pen is the comfortable leader in the first round of the French regional elections Sunday. According to exit polls Le Pen was with her niece Marion Maréchal-Le Pen in the north and east of the country receive more than 40 percent of the vote.

If confirmed, the result would be a massive boost for Le Pen, who hoped that her party after the first round of elections would stand at the top. On December 13, however, there is a second round.