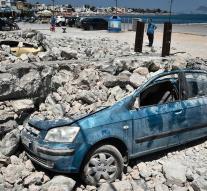 kos - A lot of aftershock has caused rest on Saturday on the Greek island of Kos. In Kos city, residents and tourists flew out massively when the ground began to shake sharply shortly after 20:00 (local time). The quake lasted about 10 seconds.

The Greek seismological institute reported that the earthquake had a strength of 4. 4. The epicenter was 20 kilometers from Kos.

The earthquake that hit Kos on Thursday evening had a force of 6. 5. After that, several aftershocks were still under way. The shock of Saturday night belongs to the heaviest of it.

There are currently a few thousands of Dutchmen living on the Greek island.