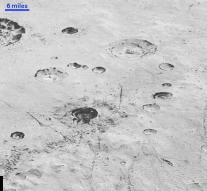 - Space Agency NASA has the sharpest pictures yet released the dwarf planet Pluto. The recordings include craters, mountains and icy plains to see.

" This close- ups that show the diversity of terrain on Pluto, demonstrate the potential of our space probes send fascinating information to our scientists on Earth ", said NASA manager John Grunsfeld. " The scientific research we can do with these images is just incredible. "

After a journey of more than nine years and five billion kilometers flew space probe New Horizons in mid- July as the first spacecraft past Pluto. Gradually, the probe sends data back to the Earth. It takes at least ten months until all the recorded data and pictures have arrived.