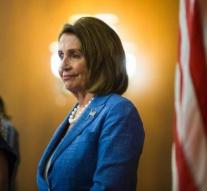 - Democrats in the US House of Representatives Nancy Pelosi have re-elected their leader. During a vote they received support far more than its opponent Tim Ryan.

The 76-year-old Pelosi is thirty years a member of the US Congress that fourteen years as leader of the Democrats. Pelosi was able to resist the call for a new leader after losing the presidential election won by Republican Donald Trump.