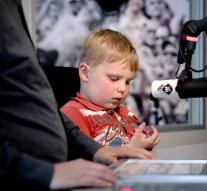 utrecht - Following the nail polish action of the seriously ill boy Tijn Koltseren, a popup store was opened at Urecht Centraal where pots of nail polish are sold. The store is an initiative by Wendy van Dijk and Youp van 't Hek and has to provide money for children with cerebral cancer.

The pots are also available for sale via the Lakeview website. Nl and are available in four Tijn selected colors. The action 'LAK by Tijn' has now collected almost 750,000 euros. The target amount is 1 million euros. This allows a special robot to be purchased that allows brain tumor tumors to be treatable.

Tijn got half the Netherlands in December on the nail polish during Serious Request at 3FM. With the heart-warming action he raised 2.6 million euros. Tijn received a high distinction from the Red Cross: the Cross of Merit. There is also a planetoid named after him.

A supervisor who spoke on behalf of him at the end of May showed that 'it is quite good' with Tijn and that the situation is currently 'somewhat stable'. '