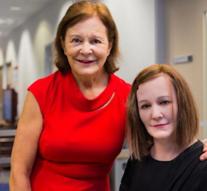 - Visitors of the Nanyang Technological University in Singapore are greeted on arrival by friendly receptionist Nadine. That seems at first sight very little, until you look closer and see that it's a robot.


Nadine has a soft skin and half long bruim her. She laughs friendly as they greeted people and she looks on during a conversation in the eyes. However, the comparison continues. Like most people Nadine has its own personality and mood swings. They can be happy or sad, depending on the conversation.
The humanoid also has a good memory and can recognize people she has met before. They can therefore revert to a new encounter on a previous call.
Nadine has been developed by scientists at the NTU led by Professor Nadia Thalmann. It is no coincidence that the two 'women' look alike. Thalmann expects Nadine can be used as a personal assistant in businesses and households. She can also be used as a social companion for children and the elderly. Nadine has intelligent software that is similar to that of virtual assistants as Cortana and Siri.
Edgar
Besides the humanoid robot NTU Singapore has also developed a telepresence robot that listens to the name Edgar. This robot looks like you expect from a robot with arms full of hinges and an expressionless face. The latter is not always so. Edgar is equipped with a special projector that can display in real time the face and expressions of a remote user to the robot head. Also, the robot is able to mimic the movements of the user's upper body. The user must then stand for a dedicated webcam.
In addition, Edgar can also conduct independent interviews and can thus be used in public places like tourist attractions and shopping centers, where it can provide visitors with practical information.
NEW