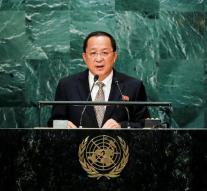 - North Korean Foreign Minister Ri Yong-ho, the United States Friday during the UN General Assembly cautioned not to fly jets across the demarcation line on the Korean peninsula. He said the Americans in this case must take into account ' enormous consequences that go beyond imagination. ''

Ri told his audience at the Assembly in New York that the strengthening of the nuclear program, despite the disapproval of the UN ' a justified act of self-defense '' is. Pyongyang is not going to abandon this deterrent because the country is threatened by nuclear powers.