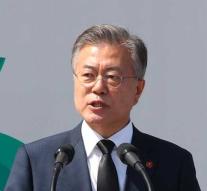 'North Korea has shown its will to complete denuclearization,' said Moon Thursday according to his office at a meeting with local media.

According to Moon, Pyongyang has not set any conditions that the US could refuse, such as the departure of American soldiers from South Korea. 'What they want is an end to hostile politics followed by a security guarantee,' said the South Korean president.

Moon meets North Korean leader Kim Jong-un next Friday in the border town of Panmunjom. Topics of discussion are mainly the phasing out of the nuclear program and the conditions for a long-term peace on the Korean peninsula.