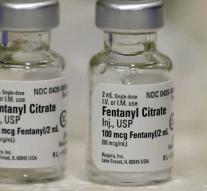 chillicothe - Staff and prisoners in the Ross Correctional Institution in the US state of Ohio are the victims of a still mysterious poisoning. This may have been caused by a kind of opiate or the very strong fentanyl. Local media in Chillicothe, about 130 kilometers northeast of the city of Cincinnati, reported that at least thirteen people have been treated by doctors for the time being.

Schools in the neighborhood are closed for the time being, that is to say that no one is allowed inside or outside. Some roads have also been closed to traffic, according to the Chillicothe Gazette.

According to the authorities, the situation in the penal institution is under control, but a wing may have to be evacuated.