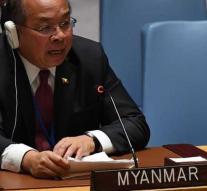 geneva - Myanmar wants to see evidence of allegations of genocide on the Rohingya minority. National security adviser Thaung Tun states in Geneva that such serious accusations should not be made too lightly.

'We have often heard accusations that ethnic cleansing or genocide is occurring in Myanmar,' said the top official. 'That is not the policy of this government, I can assure you. 'Thaung Tun reiterates that his government would like to see' convincing evidence 'of the accusations.

Nearly 700,000 Rohingya have fled the country since last August. After attacks by Rohingya insurgents, security forces had been violently repelled in the state of Rakhine. Witnesses spoke about murders, rapes and arson.

Thaung Tun said that most Muslims have not fled. 'The majority of the Muslim community in Rakhine was left behind,' he said. 'If this was a genocide, they were all driven out. 'According to the safety advisor, the refugees were particularly afraid of the rebels of the ARSA (Arakan Rohingya Salvation Army).