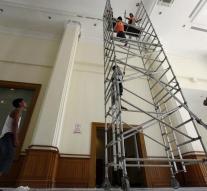 yangon - Authorities in Myanmar Thursday sent troops and police to the approximately 187 temples and pagodas in the country that have been damaged by the earthquake on Wednesday. On that quake, with a magnitude of 6.8 on the Richter scale, three people were killed.

The Red Cross puts the personal effects of natural disasters as limited, but the damage to the Buddhist temples and pagodas is great according to the authorities. Which are among the main attractions of the Asian country. Police officers and soldiers to protect the damaged buildings and if possible recover.

The affected buildings are mostly near Bagan, also known as Pagan, near the epicenter of the earthquake. Was once the capital of an eponymous kingdom. Since the ninth century, there are many thousands of religious buildings put down. Although Bagan frequently hit by earthquakes, it remained between 2000 and 3000 temples and pagodas. The temples in Bagan are often compared with those in the Cambodian Angkor Wat and Borobudur in Indonesia.