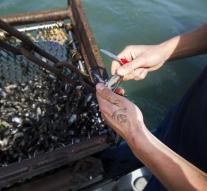 amsterdam - The mussel is on the verge of the menu to be discharged as a result of the warming of the earth, so scientists to predict.

Researchers at Washington University have discovered in the US city of Seattle that the mussels can no longer attach to a rock or rope as the acidity of the water is too high. Only when the mussel is properly attached can grow in six to 12 months to a format that can be put on the table decently.

Professor Emily Carrington, one of the principal investigators, has shown in tests that the mussel harvest will be halved worldwide due to the increasing acidity within 85 years. Each year there are now converted to mussels for 1.5 billion euros.


Mussels attach themselves to rope or rock by creating proteins with strong adhesive properties. However, these proteins do not work any longer if the pH-value of the ocean water drops, 8. 0 7. 6 up to now such as is predicted. The mussels which then end up on the bottom of the sea, are easy prey for crabs.

According to Carrington are mainly tidal areas such as the Eastern, victims of global warming. Reduces the acidity of the ocean slowly and gradually, in tidal areas will fall in her suddenly and occur rapidly.