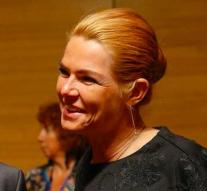 copenhagen - The Danish Minister of Immigration and Integration Inger Stojberg called on Muslims to take holidays during Ramadan 'in order to prevent negative consequences for the rest of Danish society'.

Stojberg writes this in a column published by the magazine BT. 'I wonder if a religious command to comply with a 1. 400-year-old pillar of Islam is compatible with the society and labor market we have in Denmark in 2018.'

In his own words, the minister fears the effects of fasting on 'safety and productivity'. As an example she mentions bus drivers who have not drunk or eaten for more than ten hours. 'It can be dangerous for all of us,' she warns, according to Het Nieuwsblad.

The 45-year-old Stojberg is part of the center-right and liberal party Venstre of Prime Minister Lars Lokke Rasmussen. Since 2015 she is responsible for strict migration policy of the country.

At the beginning of 2016, the Danish parliament passed a law allowing police to confiscate jewelery, money and other valuable objects from migrants. The intention is to allow asylum seekers themselves to contribute for their stay in Denmark.