Home / World / Muslims should continue to pray on Temple Mount 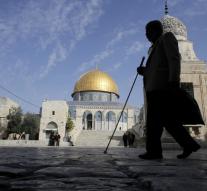 amman - Muslims may continue to pray on the Temple Mount in Jerusalem, while non- Muslims are allowed to continue visiting the site. There is no change in the policy of the Israeli government.

That Israeli Prime Minister Benjamin Netanyahu said Saturday against John Kerry, US Secretary of State in the Jordanian city of Amman.

Israeli and Muslim administrators of the Temple Mount will discuss with each other how tensions can be overcome between the two parties. Also, security cameras will be installed on the hill.