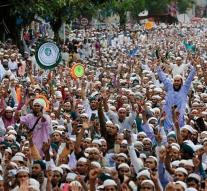 dhaka - Thousands of angry Bengals protested again in the capital Dhaka on Friday against the image of a Bengali variant of Lady Justitia, which stands before the Supreme Court in the city.

The personification of the right is wearing a sari, a traditional garment from Bangladesh and the surrounding countries. Nevertheless, the image is against the sore leg of the black cousin Muslims in Bangladesh because, according to them, it is an idol.

Now it is true that Lady Justitia is based on the Roman goddess Themis, but it is also true that the gods have not been worshiped since late antiquity. Nevertheless, the protesters want to continue protesting against the image until it is removed.