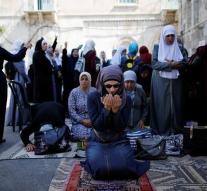 Israeli media reported Thursday that the last cameras were dismantled and that the so-called status quo had been restored.

The security measures were removed after a decision by the Israeli security cabinet. After the attack on police officers on July 14, Israel had introduced new security facilities such as detection gates for Muslim believers on the Islamic Enlightened Sanctuary or Temple Mount.

The Palestinians protested because they saw this as an attempt by Israel to gain more control over the sanctuary. In the collisions between Palestinians and the Israeli police, four Palestinians returned and hundreds were injured.

The Waqf, the organization that deals with Islamic parts in the area, and the Jerusalem moevenie have responded positively to the removal of security services. They called on Thursday to pray on the Temple Mount again. This seems to be the latest crisis between Israel and the Islamic world over the management of the sanctuary.

In the war of 1967, Israel conquered the sanctuary like the rest of East Jerusalem. Until then, the elevated sanctuary was run by a Jordanian ministry. The Israeli occupiers then transferred the board under conditions to the Waqf.