Home / World / Musk away at Tesla in settlement with SEC 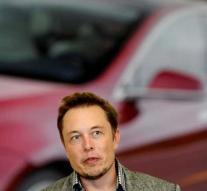 washington - Elon Musk and Tesla have reached a settlement on Saturday with the US stock market watchdog SEC. As part of the settlement, Musk must resign within 45 days as CEO of Tesla and he may not hold that position for three years, according to the SEC. Musk and Tesla must also each pay a fine of 20 million dollars, some 17.2 million euros.

The SEC had indicted Tesla and Musk for fraud after Musk had tweeted that he wanted to get the company off the stock market at a price of $ 420 per share. The tweets made Tesla's shares worth more, although there were immediate questions about how the news was shared and about the limited substantiation. When there was an explanation, it seemed to rattle, on which the value of the shares fell sharply. The money from the fines will benefit investors who have suffered damage.

Tesla has further agreed with the SEC that the company will take measures to exercise greater control over future statements by 47-year-old Musk, who will remain the director of the company he has set up. Musks role of CEO will be taken over by an independent director. Tesla will also appoint two new directors to the board.

According to SEC, the measures are intended to strengthen the management and supervision at Tesla and to protect investors. The American court must approve the settlement.