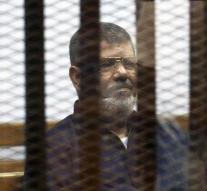 - The Egyptian Court of Cassation on Tuesday removed the life imprisonment of the deposed president Mohamed Mursi. The case, in which Mursi was accused of spying for the Palestinian group Hamas, should be done about it.

Last week scrapped the court already a death sentence pronounced against Mursi in another case.

Mursi, the Muslim Brotherhood, after the fall of autocrat Hosni Mubarak democratically elected president in 2011. Army chief Abdel Fattah al-Sisi deposed him in 2013 after massive protests against his rule. He remains imprisoned under another conviction for espionage.