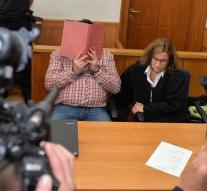 oldenburg - The already sentenced German patient murderer Niels H. has died of another 84 people in his conscience. These say judicial researchers in Oldenburg.

The forty-year-old former nurse was previously in charge of six murder cases and is serving a life sentence for that purpose. If he is also convicted of 84 other cases, that would be one of the biggest killings in German criminal history.

Niels H. injected patients into a hospital with medications that caused heart failure or a collapse of the circulatory system. Then he tried to awaken them again to be a hero for his colleagues. But this did not always end.