Home / World / Murderous gardener joined in as a Santa Claus 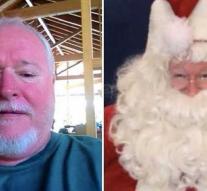 toronto - The alleged serial killer Bruce McArthur (66) went to a local mall as a Santa Claus. McArthur, a daily gardener, is accused of having murdered at least five men from the gay community of Canadian Toronto.

The police announced late last month that limbs of the victims were found in large planters. The bins were in a garden where McArthur was allowed to store his tools. After the discovery, all the details of the gardener's life are big news in Canada. For example, dating apps were found on his phone. He may have used it to lure his victims.

'He was hired as a Santa Claus via an event agency', now let the shopping center know to CNN. 'No complaints about him have ever come to us. 'According to Canadian media, McArthur, dressed in his Santa outfit, put photos with customers on his Facebook account.