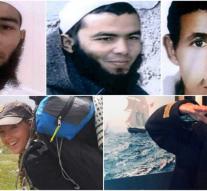 imlil - The murder of two tourists in the Atlas Mountains in Morocco is considered a terrorist act.

The 24-year-old Louisa Vesterager Jespersen from Denmark and 28-year-old Maren Ueland from Norway were found dead at the foot of the 4. 167 meter high Toubkal mountain.

Four suspects have since been arrested. The couple has ties with a terror group

According to justice in Morocco, the Danish would have cut the throat and decapitated the Norwegian. The Sun in England reports that the decapitation would have been filmed.

The terrorists surprised the women in their sleep.