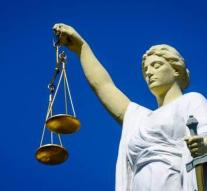 amsterdam - The 44-year-old suspect of the murder of a woman from Amsterdam-Zuidoost may also have been involved in the death of a Romanian woman in 2004. It is about 30-year-old Mirella Mos whose material remains were found in a number of trash bags in South East.

S. W. was held in June on suspicion of involvement in the loss of Sabrina Oosterbeek. The same 30-year-old woman was last seen on camera images when she left her home in the night of 7th of March.

W. will be in court next week in a so-called pro forma session.