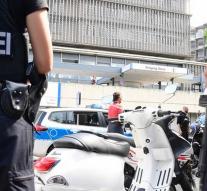 - Police do not yet know why the 72-year-old Rainer B. Tuesday in the Benjamin Franklin Clinic in Berlin are 55-year-old oral surgeon and shot. B., who committed suicide immediately after his deed, probably suffering from cancer in the mouth and was for several years under treatment.

Therefore, doctor and patient knew each other quite well, according to the Berliner Morgenpost and Berliner Zeitung Wednesday. The surgeon specialized in the treatment of tumors and worked for 22 years at the Charité University Hospital to which the clinic belongs in the Steglitz district. He was known to be particularly proficient. The doctor died a half hours after the shots from his injuries. Thus both parties involved and witnesses were dead.

Police are still behind the origin of the firearm by the offender.