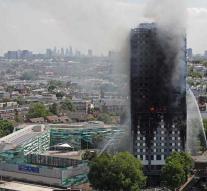 the hague - Municipalities have to make a list of the most risky buildings of Minister Kajsa Ollongren (Interior) in connection with the fire in the Grenfell Tower in London. It must also be investigated whether the façades of these buildings comply with the building regulations.

The minister actually wanted to wait for the British investigation report to the fire, but that is delayed. Partly in view of 'the social concerns about fire safety', Ollongren decided to have the buildings mapped, she writes in her answer to questions from the SP.

According to the minister, there are no indications that there are many buildings with façades that do not meet the legal requirements of fire safety. Consultations are still taking place regarding the inventory and method of research. It is possible that information from suppliers for the research is also requested.

Rotterdam and Nijmegen are already working on an inventory, according to the minister. During the fire in Grenfell Tower in June last year, the fire spread rapidly through the façade panels on the outside. 72 people died.