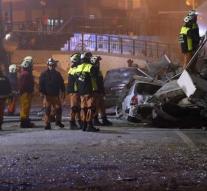 taipei - The earthquake off the east coast of Taiwan has at least killed four people. Another 145 are missing, local authorities report Wednesday.

Rescue workers search the rubble for survivors in the Taiwanese city of Hualien, which was hit by an earthquake with a force of 6.4 on Tuesday night.

In the popular city, which has about 100,000 inhabitants, five buildings have collapsed and several roads and bridges have been closed. Meteorologists expect that the next two weeks will be aftershocks with a force of up to 5.0.