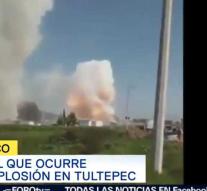 tultepec - In the Mexican town of Tultepec, people were killed again Thursday by explosions in a fireworks store. Local media report that two explosions occurred one behind the other.

According to the authorities, at least sixteen people have been killed. A regional government official said on Mexican television that among the victims are bystanders and rescue workers who came to the accident to help.

Tultepec, near Mexico City, is considered the center of the Mexican fireworks industry. It often comes to serious accidents in the mostly improvised workshops, storage locations and markets. For example, at least seven people were killed in June and in 2016 dozens were killed by a heavy explosion on a fireworks market.