Home / World / Multiple deaths by gigacrash with bus in US 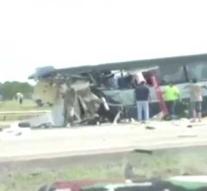 santa fe - A heavy traffic accident has cost the lives of at least seven people in the United States. A truck crashed in the vicinity of Thoreau (New Mexico) frontally on a bus with about fifty passengers.

The driver of the truck seems to have lost control of the steering wheel due to a blowout. As a result, his vehicle landed on the wrong lane, reports the police. There the truck rammed the bus from transport company Greyhound Lines, which was driving in the opposite direction.

On photos that American media have shared, it can be seen that the front of the bus is completely destroyed, and that the havoc on the road is enormous.