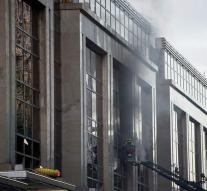 manila - At least 34 people died from a raid at a casino in Manila, most of them stung by smoke from the fire, according to the fire department.

An armed man joins Friday's (local time) hundreds of visitors to the casino in Resorts World Manila's complex by snapping it into the fire. He did not focus on people. He burned a number of tables and committed suicide by burning himself.

The action caused great consternation in the capital. The police set off the area and the complex and came to the incident with special units.