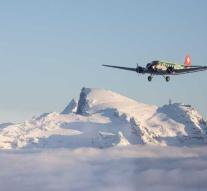 zurich - Several people were killed in Switzerland when a historic plane crashed. The plane crashed into inhospitable mountains and was completely destroyed, authorities say. None of the occupants survived the crash, but the precise number of victims is not yet known.

The aircraft crashed at the Rängg mountain pass in the middle of the country. The fierce fire had first to be extinguished from the air by helicopters, before emergency personnel could go on the spot. Nothing is known yet about the cause of the accident.

The device is a Junkers Ju-52, reports the owner, the Swiss airline Ju-Air on his website. The Ju-53 is a three-engine aircraft built in Germany that first flew in 1932 and can accommodate around 20 people.