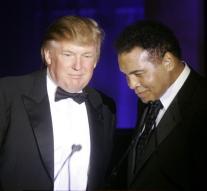 - Former boxer Muhammad Ali has slammed the Republican presidential candidate Donald Trump for his plan to close US borders to Muslims.

The 73- year-old boxing legend, who in the 60s converted to Islam, called on other Muslims to " stand up against those who use Islam for their own agenda ". He called Trump not specifically by name in his statement against NBC News. However, the letter was addressed to " presidential candidates who propose to exclude Muslims from immigration to the US "

In addition, Ali also took out to Muslim extremists. " There is nothing Islamic in killing innocent people in Paris, San Bernardino or anywhere else. True Muslims know that the brutal violence of these so-called extremist Islamic jihadists against every principle of our relgie runs. "