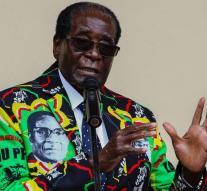 masvingo - Robert Mugabe would remain president of Zimbabwe. The ruling ZANU-PF, the elderly leader Saturday presented as its only candidate for elections in 2018. Mugabe is 94 years old. He is since the independence of the African country in 1980 to power.

'Mugabe must rule forever,' sang his supporters during the congress in Masvingo, 300 kilometers south of the capital Harare. The incumbent president called strike in his speech on the internal infighting over a possible successor.

Mugabe has faced this year with demonstrations and unprecedented criticism even from their own circle, because the collapsed economy, corruption and lack of cash. The central bank tried to remedy recently with the issue of 'Monopoly money', linked to the US dollar.