Home / World / Mugabe does not sleep, he has eye problems 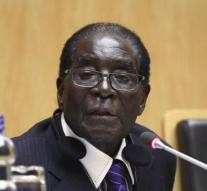 harare - Zimbabwean President Robert Mugabe is dealing with eye problems in Singapore. As a result of a disorder, it appears that the 93-year-old leader has been in public sleep as a whole, his spokesman told the state newspaper The Herald.

The senior president often seems to have a nap in public affairs, but according to the spokesman nothing less true. Mugabe, because of his advanced age, could not tolerate more bright light. 'If you look at his attitude, you'll see that he looks down,' said the spokesman.

Ophthalmologists in Singapore should now provide a solution. Mugabe went to Asia on Monday after local opticians advised him to be treated abroad. It is unclear whether the leader is also struggling with other ailments. According to some Zimbabwean media, he has prostate cancer, but government officials deny that.

Photos and videos on which Mugabe's eyes do not seem open can be problematic for the government. Opponents of the president use the footage to prove that he would be unsuitable to lead the country. Zimbabweans will return to the poll next year to elect a president.