Home / World / 'Mug is no stronger than a whole country' 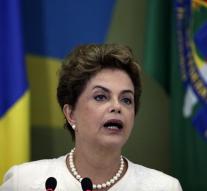 - Brazilian President Dilma Rousseff has the mosquitoes that spread the zikavirus declared war and called for the fight against zikavirus. She stressed that a mosquito is not stronger than a whole country.,, I ask everyone your employer, your employees, lenders, trade union representatives, your colleagues, your family and your neighbors to mobilize '' in the fight against the virus transmitted by mosquitoes.

Next week the carnival bursts loose in Brazil and in Rio de Janeiro in August Olympics. Thomas Bach President of the International Olympic Committee (IOC) has emphasized that everything is being done to protect athletes and visitors.

The IOC will distribute guidelines for participants, beginning next week in Lausanne agreement with the Brazilian Olympic Committee. Monday, the World Health Organization (WHO) in Geneva emergency meeting about the virus that is a great danger in any case for unborn babies.