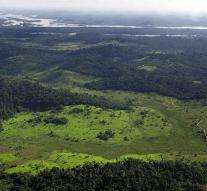 - The felling of rainforest in the Amazon in Brazil has increased significantly. According to the Brazilian Institute of Environment and Spatial Planning (INPE) disappeared between August last year and the end of July this year, 7989 square kilometers of virgin forest, almost a fifth of the size of the Netherlands. That was 29 percent more than the year before.

It is according to INPE the largest loss of primary forest since 2008. The forest to make way for cattle ranching and agriculture, especially soy. Beyond that is a lot of money with tropical hardwood.