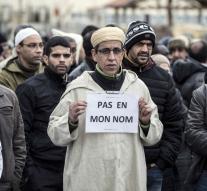 - The number of Islamic institutions and Muslims were the target of vandalism, assaults or abuse has multiplied in France this year. The government center charting racist and anti-Semitic incidents, there had been more than four hundred. About this center in 2014 recorded 133 cases. The increase is very large and very distressing, said the chief of the center, Gilles Clavreul, told the daily Le Parisien.

Most incidents following the terrorist attacks perpetrated in Paris in January and November. It is, according to the observers not only the number of incidents is increasing, but also the extent of the violence that goes with it. That has meant that there are already about a thousand of the 2500 mosques or prayer rooms are guarded by the police.

The French Justice tries since the autumn with a special unit for combating hate on the Internet stop the encouragement of the violence. Many incidents were related to racism and hatred spread through social media.