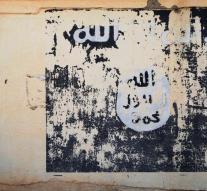 Hundreds of supporters traveled so far to Syria and Iraq to fight with IS. The flood now seems to have come to an end. The first six months of this year, according to the security just left eighteen French citizens to enlist in IS against 69 in the same period in 2015. The decline is probably due to the losses that IS has suffered recently.

Cazeneuve said that as far as known 689 French stay in the war zone, including 275 women and seventeen minors. According to government figures, there are also identified more than nine hundred people who have tried to go to Syria or expressed their wish to do so.