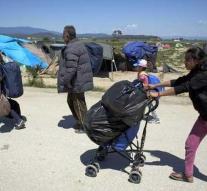 valletta - The number of asylum applications in the 28 member states of the EU, Switzerland and Norway dropped by 43 percent last year to almost 707,000, the European asylum agency EASO reports. This number is still higher than in 2014, the year before Europe experienced a huge influx of migrants.

Most applications were made by Syrians for the fifth year in a row (more than 98,000), followed by Iraqis, Afghans and Nigerians, accounting for more than 40,000 applications each.

According to EU Commissioner Dimitris Avramopoulos (Migration), the figures show that Europe is on the right track. The collective efforts of recent years to curb migration and to protect the borders have, according to him, had a result. Europe remains the continent of solidarity, openness and tolerance, according to the Greek.

Last year, the thirty countries together made a decision in first instance on nearly one million applications. In 40 percent of cases, a status was granted. At the end of 2017, no decision had been taken about 462. 532 applications. That is half less than a year earlier.