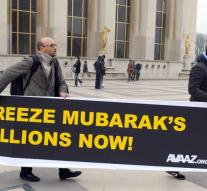 luxembourg - The EU does not have to lift its sanctions against Egyptian former President Hosni Mubarak. The possessions in the EU of the former head of state, his wife, two sons and their wives, can remain frozen, the European Court of Justice has ruled in a case that the Mubarak family had filed against the EU.

According to the Court, the EU had sufficient legal ground for its decision to make the family's resources inaccessible on its territory.