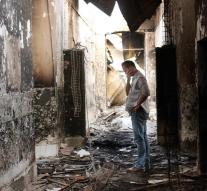 kunduz - Médecins Sans Frontières (MSF) has the death toll from a bombing at an American hospital has been redefined in the Afghan Kunduz in early October to certain 42. Until now it was assumed 30 deaths. MSF comes after talks with survivors, patients and staff to the conclusion that the actual number is higher.

This was previously not be determined, because part of the administration of the hospital was destroyed in the air strikes. Among the dead are 24 patients, 14 staff from MSF and four family members of patients.

That the hospital was targeted by the Americans was, according to the US military a tragic mistake. Human error was the cause.