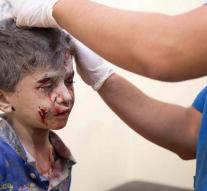 In the eastern part of the Syrian metropolis, which is held by the rebels and is bombarded by government forces, are six hospitals in operation. Four of the six clinics are not suitable to carry out operations in. ' According to various medical sources there are only seven doctors who can perform operations in the area, '' said MSF. That would be untenable now there are constantly wounded by the shelling in the district with 250 000 inhabitants.

The United States is furious about the new offensive against Aleppo. They threatened Wednesday to sever cooperation with Russia, the mainstay of the Syrian government.