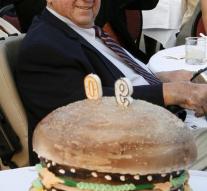 - The father of the Big Mac is no more. The American burger giant McDonald's announced Wednesday that Jim Delligatti, who introduced the world famous firm bite is deceased at the age of 98. Delligatti, since the mid-fifties franchisee in and around Pittsburgh, served the double hamburger with lettuce and sauce for the first time in 1967 in his case in Uniontown, where he was born in 1918.

Ray Kroc, McDonald's founder and CEO's, the Big Mac found such enrichment him a year later, the super-sandwich decided anywhere in the United States to put on the card. That earned him no harm on. Delligatti was also the inventor of the Egg McMuffin, which he initiated for the breakfast menu.