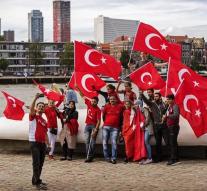 - MPs annoyed green and yellow on the reaction of Dutch Turks in the failed coup. The revelers show, according to the politicians that they are poorly integrated.

'These people cheering in the Netherlands for the dark side of Turkey and import sectarianism in the Middle East that we may lack in our country as toothache,' said VVD MP Ten Broeke.

Cheering supporters of Erdogan gathered in Rotterdam and celebrated his 'victory of democracy'. That revelry Turks turned to the camera crew of the NIS only lies would emit. 'Horrible,' says SP Member of Parliament Karabulut. 'This four you not democracy contrary. 'According Ten Broeke this fits into the streets of Istanbul or Ankara. 'Not that Rotterdam or Amsterdam. '


The partying Turkish Dutch talk about 'our land' when they talk about Turkey and waving the red flag of that country. 'This is the Netherlands. Not Turkey, 'twitters PVV leader Geert Wilders about. His fellow party member, MP Bosma, believes that such presentation with Dutch flags would not be tolerated. The NPO would according to him 'two weeks to foam at the mouth' are 'extreme right' and 'nationalism'.