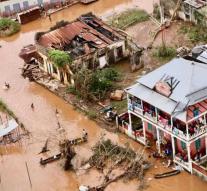 maputo - While in Mozambique there are three days of national mourning, survivors are absorbing the damage of the deadly cyclone Idai and subsequent floods.

The cyclone came ashore last Thursday at the port city of Beira. Houses were destroyed by gusts of 170 kilometers per hour, after which Idai moved further inland and sowed death and destruction in neighboring countries Zimbabwe and Malawi. The death toll is officially several hundred, but local aid organizations describe unimaginable calamities and Mozambican president Filipe Nyusi estimated that more than a thousand people may have died.