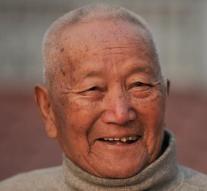 - An 85-year-old mountain climber from Nepal died on Saturday while climbing Mount Everest. My Bahadur Sherchan died in a base camp. He tried to write the record of the oldest climber of the highest mountain in the world on his name.

In May 2008, the Nepalese mountaineer knew the record to be named. He was then 76 years old. Yuichiro Miura managed to break the record in 2013. The Japanese was then 80 years old.

Presumably, Min Bahadur Sherchan got a heart attack. Due to inadequate telephone connections, it is difficult to contact the camp on the mountain which is 8848 meters high so the exact cause of death is not yet clear.

Sherchan had been training for months for the climb. He was born in the mountains and was used to high heights and low oxygen.

In 1960 he started climbing and he never stopped there. The Nepalese man leaves 17 grandchildren and 6 great grandchildren.