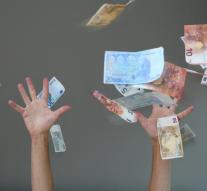 ingolstadt - On motorway 9 in the German state of Bavaria, banknotes have rained on Saturday night after a businessman lost a daily income on a motorbike. That is how the German police report Sunday.

The man lost in the vicinity of Ingolstadt a plastic bag of 9000 euros on mainly smaller bills, after which the paper money flooded the highway. The 36-year-old man stopped desperately trying to raise the money.

The warned police stopped the road for 45 minutes and assisted him in looking for the money. Eventually, they managed to find another 7500 euros. The rest was blown away by the wind.