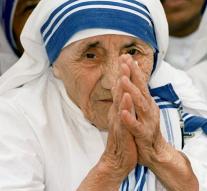 - Mother Teresa will be next September canonized by the Pope. For a canonization needed two miracles and the second by the Catholic sister performed miracle was recognized. This informs the official newspaper of Italian Catholic bishops, Avvenire, the Vatican recognizes the canonization.

The life of Mother Teresa, born Agnes Gonxha Bojaxhiu in Albania, was dedicated to helping the poor. She received the 1979 Nobel Peace Prize. In 1997, she died at the age of 87, six years later, she was beatified.

For beatification, one miracle is necessary for canonization two. Both are recognized by the Pope wonders about by medical inexplicable cure.