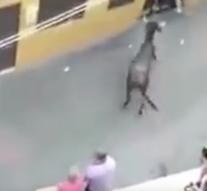 moratalla - A mother of two children's Sunday deceased after being gored by a bull.

The tragic incident happened during the bull festival in the Spanish city of Moratalla, where the 47-year-old Sofia Lopez Gonzalez along with her husband and children (15 and 19) was present.

On the video you can see that the woman is still trying to hide behind a fence. However, they reacted too late and was hit in the stomach by the bull. The woman was rushed to hospital where she died a few hours later from her injuries.


Gonzalez is not the first victim in a bull festival in Spain. In 2016, 12 people were slain there by a bull.